I have been studying the new iOS 7 for a few days now, and it seems apt to make a post about it right now. It has been more than ten days since Apple introduced the latest edition of the legendary mobile OS in the World Wide Developer Conference. For such a long time, iPhone and iOS have been in need for a formidable software update. iOS 7 is that update.

For how long can Apple keep competing with a more streamlined open-source operating system like Android? While new mobile operating systems, such as Windows Phone and BlackBerry 10, were making an entrance, iOS stayed the same. While innovative user interfaces were being ported on top of Android by device manufacturers like HTC and Samsung, iOS stayed stale and strong. Time has finally come for it to stay stale no longer.

This is what motivated the operating system update.

The person who was in charge of iOS and the desktop operating systems in Apple was Scott Fortsall, who left Apple after the Maps fiasco. Lately, the hardware design chief, Sir Jony Ive has been heading the software design as well. Ive’s specific design concept, known as ‘flat design’, is quite different from Forstall’s. Here is the basic difference in view:

Which one do you like better? Forstall’s 3D style icons or Ive’s flat design?

The background should not affect your judgment, though. The Ive design has a relatively dull background as you can see. Some of you may favor Ive’s flat design over Forstall’s. However, the important thing to note is that iOS 6’s design is old and has been around for nearly five years without noticeable changes. Due to that reason, the new flat design may seem to be a fresh and appealing change. On the other hand, a person more used to flat icon design would find iOS 6 better looking.

In whatever case, it’s not the design that matters, but the features available. Here’s a comparison of icons submitted by Flickr user ‘nielsboey’:

Take a survey—tell us which icon set you like…

Here are some of the innovative new features on iOS 7. Apple does indeed provide their own description of iOS 7 features, talking about how great, amazing, streamlined, and “simply complicated” the operating system is. But you should know that is all just a marketing gimmick. For the truth, read an independent review like ours here. 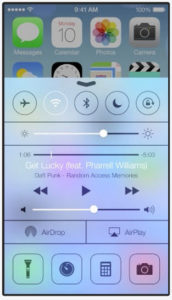 Shown here is the Control Center app of iOS 7. It is a collection of commonly accessed functions of the smartphone. Some functions, such as Airplane mode, Bluetooth, Wi-Fi, screen brightness, music playback functions, AirDrop, AirPlay, and some apps like Calculator, flashlight, camera are available here.

The Control Center is accessible from the bottom by a swipe. It is quite a brilliant feature of iOS 7, and with its layered design, it is quite charming too. 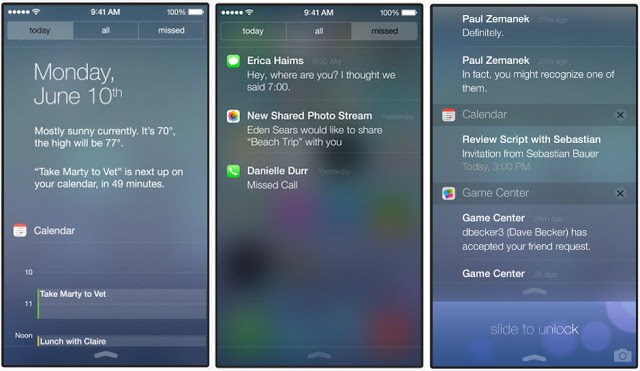 A new feature known as ‘Today’ gives immediate notifications of all the events planned for the day. Compared to the iOS 6’s dull, textured metallic gray background, the new Notification Center’s color scheme is an absolutely welcome change.

You can tap on your home button twice to bring up the new iOS multitasking option, in which you see the previews of open applications on a horizontal scroll view. 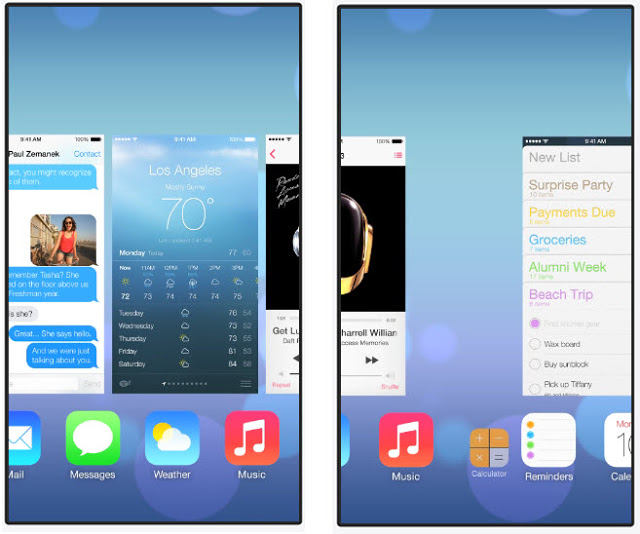 The apps can be closed by a vertical swipe, and you can tap into any app easily. This is not quite different from Android’s multitasking system.

The camera on iOS 7 has been revamped slightly. It now gives access to all the major camera functions as soon as you open the camera. Also, the redesign has removed the professional camera look that was there in the previous iOS. It may be a little bit disappointing to camera freaks, but this time the camera is much more accessible and easy to use.

The Photos App has also been quite a bit redesigned. Now, the iOS is capable of grouping your photos in various categories, called Collections, Moments, and Years. It is meant to make the browsing of pictures much easier. Also, with iCloud integration, sharing photos and videos will be easier. 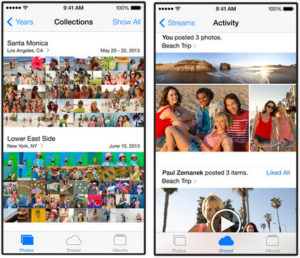 We all know Safari is not the best browser out there, but Apple has done some great job with this version. The flat design and simplicity has crept into the way that you will use the browser. It now shows much more content than before as the browser buttons and menu are hidden from view. 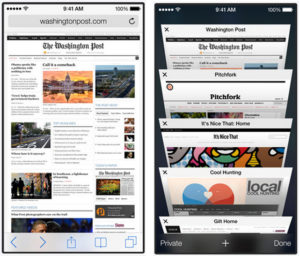 The second image above, the new Tab View of Safari helps scroll through the open tabs easily.

As you well know Apple revolutionized the voice recognition in mobile world with the introduction of Siri with iPhone 4S. Later, Google Now, S Voice and such other voice recognition systems have managed to slightly overshadow Siri, and a famous Big Bang Theory episode did not help either.

Siri is now slightly revamped with additional voice options including male voices. Also, language options include English, French, and German right now. Siri has more functionality too, with searches on Bing, Wikipedia, and Twitter besides Google, and it can do small tasks like setting screen brightness.

iTunes Radio is Apple’s newest application. It is a streaming radio service available only in the US for the time being. The devices supported include iPhone, iPod, iPad, Macintosh, Apple TV, and regular Windows PC. 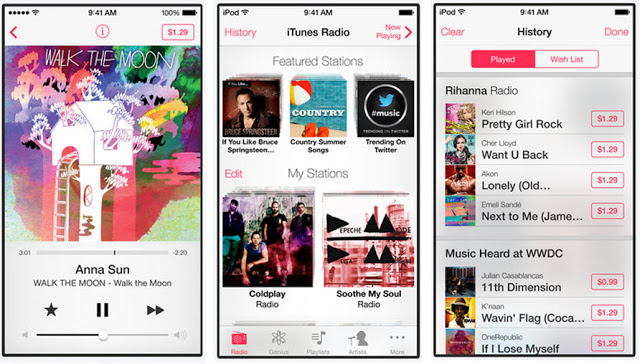 iOS 7’s new music player is directly integrated to iTunes Radio. iTunes being the most popular music service in the world, iTunes Radio, Apple claims, will give access to the latest songs first (a way to steal customers from such other services like Spotify).

iTunes Radio is provided as an ad-supported version to customers, and with iTunes Match subscription (cloud music service), you can zap those ads.

Within iPhone, a wireless file sharing function was not available for such a long time. AirDrop rectifies this issue. With this new feature, you can transfer files to anyone in the vicinity via Wi-Fi or Bluetooth. It is pretty simple and the app is accessible from your Control Center. 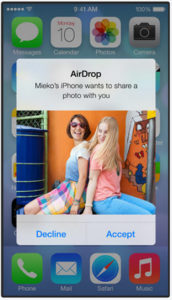 The app helps share files with one or more people highly securely. The drawback still is that AirDrop is not available outside Apple’s range of products, and it requires an iCloud account.

iOS soon will have a better integration to your car. Already most of the cars available out there are capable of integrating to your iPhone’s music functions through Bluetooth and USB. With iOS 7, Apple will enhance the integration of phone functions on your car (through what is known as “iOS in the Car”); calling, messaging, music playback, etc., should be available on your car’s dashboard through Siri of course.

Find My iPhone has become more robust now. It requires your Apple ID and password for erasing the iPhone and reactivating it with other credentials.

The compatibility of iOS 7 is widespread, with iPad 2 and 4, iPhone 4 onwards, and iPod Touch 16 GB onwards supporting the new operating system.

So far, we have talked about the major features of iOS 7. It will be made available this fall. The operating system has gone through some of the important, game-changing updates. However, it needs to be seen whether the customers will find it attractive or not.

For instance, the incoming call screen on iOS 7 doesn’t seem to inspire as well as iOS 6’s. 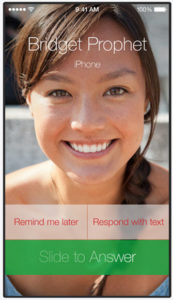 However, we think the design is one aspect that Apple has excelled in. The flat design strategy put forward by Jony Ive hasn’t gone without a bit of criticism. In our view, the new operating system looks excellent and futuristic. It has taken design cues from others, especially Microsoft’s Metro UI.

Freshness can be perceived all over the new user interface, and that is all that matters. Also, overall the iOS seems to be brilliantly simple to work with. A proper hardware upgrade is an important thing for the next version of iPhone. A regular, iterative update will no longer work.

Apple has done a wonderful job with this iOS update. It looks fresh and easy to get around to. Thin layered design also is elegant and futuristic. It is not known how much battery and resource savings can be expected from this OS, but it will all be revealed when it comes to the market by the end of the year.

According to 9to5Mac, Apple is testing iOS 7 to use motion detection. This is something that Galaxy S4 has made possible. Apple is experimenting iOS 7 to work with your head movements towards left or right. The head movements can be tied to a number of options, such as returning to the previous menu or opening the Siri voice assistant.

Check out this video from 9to5Mac:

This can indeed prove to be beneficial for the next iPhone as it can at least compete with Samsung on a better level, we hope.